There is much evidence in the school log-books emphasising the rural community around the town. Absenteeism is brought about by children following rural pursuits.

December 23rd 1908. `Many children rendered themselves late for afternoon school by following the hounds in the near neighbourhood’.

Local events are mentioned. The school is frequently used as a polling station at election time and in 1903 the log book proclaims in blue ink the opening of the new railway line.

The track was clearly visible from the church and school and the noise of the steam trains would have been fully audible to the children.

Aerial view of St. Nicholas Church and Wickham Junior School (the Infant School is out of sight to the right) with the single track Meon Valley Railway in the foreground crossing Bridge Street, c.1931.

National and international events – royalty, war, Empire – had their impact on local events and activities. On August 8th 1902 there was no school in the afternoon to allow preparation for the Coronation festivities as was the case on September 6th 1911 when Coronation Sports were held in nearby Rookesbury Park. On May 20th 1910 there was no school due to the `Funeral of the late King Edward the Peacemaker’.

The schoolmaster paid a lot of attention to the flying of the Union Jack and described in detail the arrival, hoisting and flying of flags on the school premises.

November 18th 1909. `Two new Flags – Union Jacks – subscribed for by the Children, Teachers, and Managers…were brought to the school yesterday by the Rector, the Rev. E. Hungerford Duke, with permission to hoist the smaller flag (3’ x 6’) to fly during school hours on ordinary days, and similarly to use the larger (4 ½’ x 9’) flag on Sundays, and on certain special days approved by the Managers’.

War cast its shadow on Wickham and the school. In 1900 it was the Boer War and the relief of Ladysmith, a cause of rejoicing as was again the case in 1902.

March 1st 1900 `Children allowed extra play time in the afternoon while the Church bells were ringing in celebration of the welcome news of the relief of Ladysmith’.

June 2nd 1902. `Left school in charge of Miss Skeggs and Miss Holder while I went to help ring the church bells (in celebration of the Peace Rejoicings) from 10 till 10.25 a.m.’

The impact of the First World War was more sinister. Memorial services are mentioned and the lives of teachers affected. In 1916 a few months after Langford retired, wounded soldiers came to Wickham Square and the schoolchildren were taken to meet them.

September 23rd 1914. `Left school in charge of Mr Taylor, to attend Memorial service to the late Major John Trefusis Carpenter-Garnier, and to the late Second Lieutenant Rhys C. ff. Powell;- both killed in Action in the present war’.

October 5th 1915. `Mrs Churchus [teacher] absent: having been summoned yesterday by telephone to visit today her Brother wounded in the recent advance of the Allies on the Western front’.

September 6th 1916. `At 2.30 the children of these schools were marched to the square to welcome & cheer about 150 wounded soldiers from Portsmouth on their way to Hambledon’. 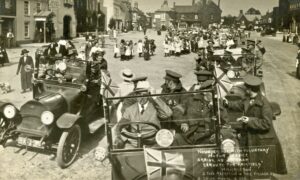 WW1 wounded soldiers on their way to a reception at Hambledon, 1916.

September 21st 1883. `School attendance officer visited this morning. He was unable to make any calls on the parents of absent children owing to the presence of one or two cases of diphtheria in the parish…short attendances this week in point of numbers, are owing to the anxiety of the parents concerning the cases of illness above-mentioned’.

January 22nd 1886. `The attendance this week has been as low as 71 owing to severe weather and panic on account of small pox’.

December 14th 1888.`The attendance continues to be very poor owing to the measles’.

Photographs from the Stan Woodford Collection.

For more on education in Wickham, use below link.