Between 2017-19 a small group of Wickham History Society volunteers, led by Jim Coleman, took on the translation of Latin documents about Wickham held at the Hampshire Record Office, which include these two Wickham Manor court records dating from 1697 and 1698 – the oldest surviving complete records. 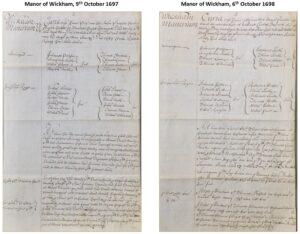 WHAT DO THESE WICKHAM MANOR COURT TRANSLATIONS TELL US ?
Read the transcribed Medieval Latin documents and their English Translations below this article.

Why are they in Latin?
All court proceedings in England were required to be recorded in Latin until 1733 (except during the Commonwealth), although the court itself would be held in English. The Latin used is a medieval English version, with many abbreviations, which makes translation more difficult.

The meaning of Court Baron and View of Frankpledge
This tells us that Wickham Manor was not only a “court baron” which dealt with the business of the manor but also a “court leet”, with judicial powers and the right to appoint a constable.  The ”view of frank pledge” dates back to Anglo-Saxon times when groups of about ten male heads of household (a tithing) were held collectively responsible and fined or punished for any breakdown in law and order in their community.  These powers were much curtailed by the seventeenth century and we know of only one surviving reference to a criminal case, against the Miller of Funtley in 1683 who was convicted of riot and fined £10.  It does show that Wickham Manor court had exercised substantial powers in the past. These were held as one court in Wickham.

Why are there two Lords of the Manor?
This was a critical time in the history of Wickham Manor. Sir William Uvedale’s surviving male heir died under age in 1663 and so, in 1694 on the death of Sir William’s widow, Victoria, the estate became jointly owned by his two daughters by his first marriage.  By 1697 both their sons had inherited: Uvedale Corbet and Charles, Earl of Carlisle.  In 1699 they agreed the division of Wickham Manor, so these translated records are among the last courts held for the whole manor until the Rashleigh family “reassembled” the manor in the 1720s.  There are no known manor court records from 1700 until 1735.

What does the “Homage” and “Sworn for the lord king” mean?
Every customary tenant and every freehold tenant who owed “suit of court” had to attend the court or be fined if they had no good excuse, usually after three absences.  Originally everyone who had to attend would have acted as a ‘jury” for the court baron, but later a jury was established and in practice usually only a small number of tenants came – those present are listed as the “Homagium”.

The court leet had criminal justice powers for the “vill” of Wickham and originally appointed individuals to represent the tithings at the Hundred Court, and so those “Sworn for the Lord King” are the jury.

How land was rented and transferred at the manor court
There are some good examples in the two translations. 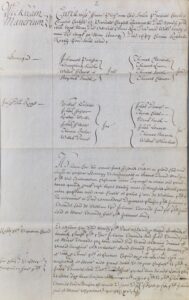 In the 1697 court Jane Fifeild is a “customary” tenant. This means she holds Tapnage and Rotherfeild according to the “customs of the manor” and she has no right to go to the royal courts to assert her rights, unlike a freeholder. She wants to pass on her customary tenancy to the Edwards family and to do this she has to formally surrender her tenancy back to the Lord of the Manor and hope he will confirm her request. They are given possession (“seisin”) according to the custom of Wickham Manor for three lives, so possession returns to the Lord when the longest lived of the three named dies.

In addition to the £43 John Edwards pays for the transfer, he also pays a “heriot”, a charge, which in Wickham manor was the “best beast” (or probably a cash equivalent), and that would be charged on each transfer between the three lives. As well as the annual rent of 40/-, the Lord of the Manor also gets four capons and may be entitled to some free labour too – this dates back to the origins of customary tenants who were “unfree” tenants who paid no rent but provided labour. It is unlikely these were still significant by 1697. 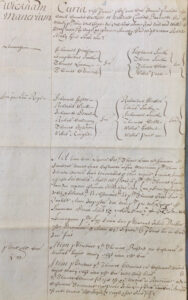 In the 1698 court Thomas Lunn is given permission to sub lease his customary tenancy for 21 years (but only while he is alive and thus has possession). This is a period of transition between the “old fashioned” customary tenancies based on lives and the increasing practice of leasing land – gradually nationally and locally customary tenancies were replaced by leases.

Two deaths are reported – these must be reported by the jury as the Lord of the Manor is then entitled to the “heriot” and, if it is the “last life”, regains possession of the tenancy.  In the eighteenth century at one point the Wickham jury was said to have failed to report on deaths and the Lord of the Manor took legal advice on bringing criminal charges against them.

A curious phrase in the last paragraph of the 1698 court is having seisin “by the rod”. The customary tenant holds the end of the steward’s rod of office between his hands and swears fealty to the Lord of the Manor.

What did the Tithingman do?
John Booker was appointed “Tithingman” at the 1698 court. Originally everyone in the “tithing” was responsible for maintaining the law, and could be fined or punished for failing to do so, but over time the court leet began appointing one or more tithingmen to carry our that duty on behalf of the manor. We don’t know the range of duties at Wickham but it could have involved collecting fines as well as dealing with minor breaches of the peace. The role was unpaid but the Tithingman may have been relieved of his rent by the lord of the manor or had other benefits in kind while he held office. Later the role of Constable took over some of these duties. 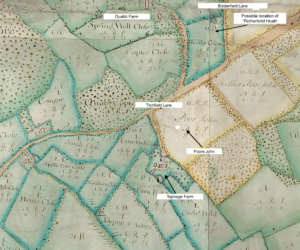 The tenancies referred to were all on Titchfield Lane and are marked on the later 1726 manor of Wickham map. Poore John is the field opposite the turning to Quabb Farm, part now Golf Course and part still field. This is not the only “Poor John” field in Wickham and it may refer to the popular folk song (dating to at least pre Elizabethan times) “Poor John Barleycorn is dead” suggesting the field was frequently used for barley – other ideas very welcome!  There were three “Tapnage” farms but while the main farm is shown, which is still there today, the other two have disappeared.  The area marked “Heathy Ground” between Quabb and Biddenfield Lane is probably “Rotherfieild Heath”: the name had disappeared by 1726, but both Rotherfeild Heath and Tapnage are also mentioned in a 1567 will.

The transcribed Medieval Latin documents and their English Translations 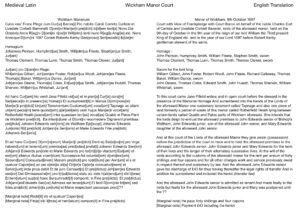 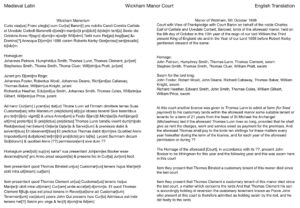