“Quob” is one of Wickham’s hidden gems, an old farmhouse tucked away at the end of a track off Titchfield Lane.

Between 2017-19 a small group of Wickham History Society volunteers, led by Geoff Phillpotts and Jim Coleman, took on the translation of Latin documents about Wickham held at the Hampshire Record Office and in the process uncovered the earliest recorded land transfer we have (so far) for Wickham Parish: Quob Farm.

THE LATIN DEED OF TRANSFER 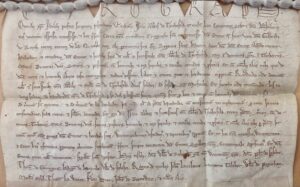 The deed is written in medieval Latin, in a very clear script. There were still many challenges for the translators as words were heavily abbreviated, spellings and punctuation were not yet standardised, and tenses, sentence structure and technical language (such as “Bruerus”: the right to cut heathland) had to be understood. While the final translation may not be wholly accurate it has captured the main sense and meaning of the grant of land. The serrated top edge shows it is an indenture (from the Latin for teeth) so the buyer’s and seller’s deeds can be matched up.

THE LATIN TEXT AND ENGLISH TRANSLATION

English
To all Christ’s faithful this present deed, for all those who observe and hear, Isaac, Abbot of Titchfield and of the Convent of the same place, Greetings in the Lord. Know that we by common accord have granted and by this present deed of ours in the form of an indenture have confirmed that [is granted] to Lady Emma who was wife of Lord Geoffrey de Roches the whole land of La Quabbe with all its appurtenances, which [land] Roger son of Henry, the grandfather of the said Lady Emma owned at one time; to have and to hold to the said Emma and her heirs from us and our successors as Abbots of Titchfield, both [in the form of] houses and also turf-pits, triangular plots of land, heathlands, virgates, footpaths and pastures, with the men and their households and carts, advantages and profits, and all other things which might happen to be attached to these lands and men in whatever case, freely and peacefully by law and inheritance, in perpetuity; henceforth paying annually, to ourselves and our successors as abbots and to our church of Titchfield two shillings on the Feast of Saint Michael and thereafter only so much; twice a year [attend] the court at our Hundred of Titchfield. in person or via their bailiff whosoever will be in time and place with the men of the said buildings.

Namely by the deadline of Martinmas* and the deadline of La Hockiday*. Thus [?] at the said Hundreds they will face no suit nor plea; for all customary villein tenure (habitual service), at the court of law, and [any] claim to be made. And I the said Isaac, Abbot, and our successors as abbots of Titchfield [transfer] all the said lands with their houses, turf-pits, triangular plots of land, heathlands, virgates, footpaths and pastures, with the men and their households, and carriages, and advantages and profits, with all the other things in regard to villein tenure, before all people, to the said Emma and her heirs.

We shall guarantee, defend and agree [these things] in perpetuity. And so that this our concession, guarantee and this deed of affirmation should have perpetual validity, to this present document of transfer to the said Emma we have affixed our Conventual seal. And the said Emma for her transfer to us has affixed her seal. The witnesses to this are William of Raley [Raleigh], by God’s will Bishop of Winchester, Lord Ph[ilip] of Spersolte, Thomas of Geminges, Hugh of Hoyville, William of Falaise, Roger of Merlay, John Lancelevee, Lawrence Talbot, Wlliam of Pagham, Matthew Oysel (Bird), Thomas la Waite, Florent Doguet (Mastiff), John of Brunswick (?), and many others.

DATING THE DEED
The Hampshire Record Office file dates the deed to 1260. However, the first witness, William de Raley (Bishop of Winchester), died in 1250 and left England in 1249, so the document must date back to 1249 or even earlier.

ABBOT ISAAC OF TITCHFIELD ABBEY
“Isaac was the second abbot; in his time the manors of Cadlands and Inkpen were acquired. He died on 19 June, and was buried in the cloister before the door of the chapter-house, on the right hand of the monument of the first abbot.”

That is all we know about Isaac, so far.  He may have come with Richard, the first abbot, from the Premonstratensian mother house at Halesowen.  No years are given in the registers for the dates of death.  The monks were known as White Canons with a reputation for strictly following the rule of St. Augustine.

“THE LADY EMMA”
Emma des Roches was a des Roches by marriage and the deed states her grandfather Roger (son of Henry) previously owned “La Quabbe”.  From other records we know her family held the manor of North Fareham (now Roche Court School).  Following the death of her father Walter and her brother Hugh she became a ward of Peter des Roches, Bishop of Winchester.

Emma had become the heiress of the North Fareham manor and much other land and Peter des Roches married her to Geoffrey des Roches, his nephew.  Bishop Peter had founded Titchfield Abbey in 1231 and was in a strong position to help arrange the return of La Quabbe to Emma.

Emma and Geoffrey had two recorded children, Martin who died in 1276 and was Sheriff of Hampshire and Sir Hugh des Roches who held the Manor of North Fareham and to whom she left “the land of Quabbe in the parish of Titchfield”.  Her great great granddaughter Mary des Roches married Sir Bernard Brocas: the Brocas and then the Gardiner families continued to hold the North Fareham manor / Roche Court until it became a school.

WHY QUOB (OR QUABBE)?
The name is derived from old English for “a marshy or boggy place”; the closest surviving use today is quagmire. Although Quob, or Quabbe, is an unusual place name today, there were in fact two Quabbe’s in the Hundred of Titchfield at the time of this deed.  Today locally there is a Quagg End in Shedfield, a Quob Lane in West End and a Quob Riding School in Durley.

THE FARM OR MANOR OF QUOB
Quob Farm or Manor is clearly very ancient, dating back to well before 1249 as the deed states that Emma’s grandfather previously owned / tenanted the farm.

It was a good sized holding.  The deed suggests this in its description, and we know In 1726 it was a farm of 131 acres. The field names then included hop gardens, coppices (timber), meads (water meadows), alder moor as well as pasture and crop fields. “Rushy Close” indicates the boggy nature of some of the land.

“to this court came Thomas Schad for the tithingman of Quob and witnessed that all and each of the tithing died in the present pestilence (bubonic plague) and that all the land and tenements within the bounds have come into the hands of Lord John des Roches who has sent the said Thomas to this day for the tithingman.”

The farm recovered in time and remained in the ownership of the Des Roches and subsequently the Brocas family of Roche Court.  As late as 1761 it retained a link to the Manor of North Fareham which received a £1 annual rent, although by then it was part of Wickham Manor.

Wickham Manor must have acquired Quob before 1726, when it appears on the Wickham Manor Estate Map with the comment “the whole farm being in Titchfield”.

It is referred to again in 1765 in a valuation when the Wickham Manor was for sale.  It was farmed by a Mr Eldridge and In 1769 we have a complete list of the recently deceased Mr Eldridge’s belongings being sold on behalf of the Lord of the Manor.  The steward, Thomas Kimber, remarks they are in such poor condition he is not sure anyone will buy them, his letter adds:

“ Eldridge’s wife gives her duty to you and begs for the best bed and one of the iron pots and firepan and tongs, square table. She would be thinkfull for she have nothing in the world left. She is half gon with child…”

His next letter is much more upbeat, enclosing a list of the goods and current crops sold for £89. Included in the letter are Mrs Eldridge’s thanks for allowing her to keep her bed and other goods she had asked for. 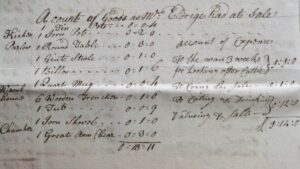 She bought 13/- 11d of other goods at the sale but Mr Kimber reported she was unable to pay for them – we can only hope he let her keep them.

IN CONCLUSION
We had no idea when we embarked on the transcription project how much more information we would be able to find out about “the Lady Emma” and “La Quabbe”.

Please note: Quob Farm and the track leading to it are private property.