Ever looked at the Brazilian Steakhouse at Crocker Hill, halfway between Wickham and Fareham, and wondered about the history of this building?

Some may remember it as a Thai restaurant, before that, Krakatoa, a shop specialising in furniture from the Far East, but it was originally built as the ‘new’ Old Vine public house in the early 1930s.

The original Old Vine was an inn dating back to Georgian times. Deeds dated 1766 describe the premises as a brewery. Water was essential in brewing and old maps show the presence of a well. The property was later expanded to include a dwelling house, brewhouse, stables and several outbuildings.The premises were purchased by Messrs. Henty & Co., Brewers, of Chichester, in 1844.

The Hambledon Hounds, a local foxhunt, met regularly at the original Old Vine from the mid-1800s until the early 1930s. 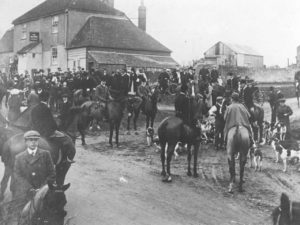 Hambledon Hounds at the original Old Vine circa 1930.

On the morning of 31 January 1924, residents of Crocker Hill were shocked to hear that the licensee of the Old Vine had shot himself, after murdering his wife, his son, and his daughter.

What happened at the Old Vine?
Arthur Richard Gamblin had been a carpenter on the construction of the Meon Valley Railway, living on Bridge Street, Wickham, with his wife Sarah Jane and young family. When the railway construction came to an end (the railway opened on 1 June 1903), Arthur decided to change occupations, and in 1903 became the licensee of the Old Vine, moving there with his wife and their five children. Their youngest child, daughter Sarah Jane (known as Cissie), was born at the pub in August 1904.

In 1924, Arthur was living at the Old Vine with his wife, two youngest sons Walter and Albert, and daughter Cissie. His eldest son, William, was married but lived nearly at Wickham Common. 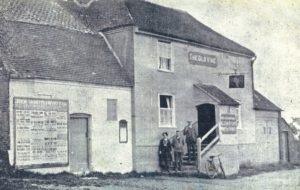 The original Old Vine circa 1920, probably with Arthur Gamblin, his wife and one of his sons.

On the fateful morning, there had been an argument between Arthur and his sons Walter and Albert about the planting of some blackcurrant bushes. After an early breakfast together, the two men set off to dig up and replant according to their father’s wishes.

Sometime a later a shot rang out and eldest son William, working nearby, went to investigate. William must have just entered the premises when his father shot him in the face, killing him instantly. Having killed his son, Arthur then turned the weapon, a double-barrelled shotgun, on himself.

Cissie was found dead in her bed and was probably shot first as she lay asleep, dying instantly from a single wound. Sarah Jane, still in her night clothes, was found in the passageway, perhaps fleeing from her deranged husband.

At the inquest
The two surviving sons of the family, Walter and Albert, sobbed as they recounted the events leading up to the event. Arthur had summoned his three sons to a meeting in late 1923 to say that he had financial difficulties and that the boys would all have to make their own way. They were already working in the market gardening business but must ‘do more’.

The verdict of the inquest was that Arthur Richard Gamblin murdered his wife, his son and his daughter by shooting them with a double-barrelled shotgun, and then committed suicide during temporary insanity caused by an ungovernable temper.

Interestingly, despite Arthur’s worries about money, his estate was valued at £763 6s 8d, a considerable sum at the time.

A huge funeral
Arthur Gamblin’s funeral, on 4 February 1924, was reportedly attended by nearly 4000 mourners, paying their respects to Mrs Sarah Jane Gamblin, William, and 19-year-old Cissie. Sympathy was expressed for the bereaved relatives, especially the two surviving sons, Walter and Albert, and William’s widow. Not only the local area, but the whole of England, was shocked.

Arthur Gamblin is buried with his wife in Fareham Cemetery, Wickham Road. Their children William and Cissie, the other victims of the tragedy, are buried together in an adjacent grave.

The present building
Several years after the murder, the Old Vine was demolished and a ‘new’ Old Vine built to the north of the original site, set back from the road with room for cars and charabancs (early buses, used typically for pleasure trips) to park. This new public house had larger bars, and saloon and private rooms “well adapted for modern trade”. The building, dating from 1932, is today the Brazilian Steakhouse.