Home Articles Memories of the Second World War & After: My conversation with Janet Bowater & Carol Hazzard

Memories of the Second World War & After: My conversation with Janet Bowater & Carol Hazzard

Carol and Janet have lived in Wickham all their lives and been best friends since school. People today still think they are sisters. Carol is now aged 79 and Janet 80.

I visited Janet as she had some deeds which she wanted help deciphering and she kindly agreed to talk about
Wickham. When I came to chat, I found Carol too – two for the price of one!

Neither of them was brought up in “well off” families, although Carol reckons Janet’s family was a little better off. Carol was born at what is now 1A Winchester Road, the middle cottage in a row of three on Winchester Road just before the Buddens Road turning, at that time it was just fields. The WC was three quarters of the way up the garden, and the bath was a tin bath in front of the range. For a time her mother had lived in part of what is now The Square Cow.

They were the first family to get one of the new council houses on Buddens Road and it was wonderful to have an internal WC and bathroom. Before they could get a house they had to be visited by Mr. Roberts, of A.E. Roberts, and Dick Warwick’s mother who Carol thinks were councillors on Droxford Council to make sure they should have a house.

Later, Carol and her husband got a council house of their own when they had their first baby.They left the pram across the front door of the home they shared with Carol’s parents so the councillors would have to move it out of the way and know the baby was definitely there. Carol remembers going to Droxford Council to get free wallpaper for the house. It was a great help, but everyone had the same wallpaper!

Her father was a “desert rat” in North Africa, also serving in Italy during the war and had a job as an RAC patrolman. He started by having to cycle to Winchester every day. Later he got a motorbike and sidecar and finally a van. There was an RAC box opposite where Ashleigh Manor Nursing Home is now and the patrolman on duty would salute passing motorists, especially RAC Members. There was an AA box was where the Shell Garage is now.

Janet was born in Dairymoor, next door to where she lives today. They had an outdoor WC too but owned the house, and Janet’s aunt lived and owned next door. It was open fields between her house and Carol’s, on Winchester Road, then. The garden of what was Hammonds Garage (now the Old Garage) on Bedford Place comes right up to the back of their house. Traffic was not much of a problem then – Carol remembers running up the middle of Winchester Road on her way home. The pair of them were pretty fit then – they still are – and they would walk to the top of Portsdown Hill on a Saturday to see the motorbike scrambling there, where the car park is at the top of the road from Southwick. Then they would walk to Southsea to the Fair, and then walk back to Wickham. It wasn’t just the children who were fit. In the summer Janet’s mother would make the tea for the family and then cycle to Hundred Acres to help her brother pick the strawberries and gooseberries and then bike onto Newtown to play tennis.

Janet’s father worked as a mechanic for Southdowns Bus Company. It was a reserved occupation so he was not called up but joined “Dad’s Army”. Her mother was in the Women’s Voluntary Service and used to take in expectant mothers for Beverley House, which was a naval maternity unit during the war. There was one very sad occasion where a mother had just had her baby only to hear that her husband had lost his life on HMS Hood. Her Dad grew his own vegetables and the mothers used to complain initially that “proper veg” should come out of tins, but were soon converted.

Janet and Carol found a piece of parachute silk in the Dairymoor field behind Janet’s house – bombs fell at Willmots and Meon Park. Carol remembers trying to hide under the table with lodgers the family had taken in during the war: the wife was very large but luckily the husband was very small but there wasn’t a lot of room. 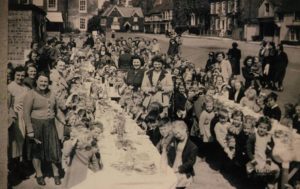 There was a brick air raid shelter built in the Square and Janet has a photo of the VE Day Street Party in the Square which both she and Carol are in. The Army had taken over where the fireplace shop on Winchester Road is today, and the Navy had taken over Rookesbury. Janet remembers the soldiers in the woods on the road to Droxford before D-Day.

They both have a connection with “The Old Tea House” where Lilly’s is today. Carol’s Mum worked there for Mrs. Margaret Anthill and before that Mrs. Winnan and Miss Thorne. They were both great aunts of Janet’s; Miss Thorne lived in the cottage next door to the Tea Shop, Mrs. Winnan lived in a cottage, since demolished, at the corner of Bridge Street and School Road.

They went to Wickham School (now demolished) on School Road which they remember very fondly. Janet went home at lunchtime but Carol had free school dinners which were delivered to and eaten in the Church Hall, then on School Road too. In those days that was where everyone had their wedding receptions. Miss. Warren was the first headteacher they had; she lived in Ivy Cottage on Bridge Street. Miss. Penfold, the second headteacher, made a big impression; she wore pink silk bloomers to her knees and ran a Girls Friendly Society at her house on Titchfield Lane that they enjoyed going to. The secondary school was then in Fareham not Swanmore, and there was a double-decker bus from Wickham.

Although their families were not able to afford expensive outings there was plenty for them to do as girls and teenagers. They both went to the Chapel Sunday School, (one family was Chapel, and the other was Church), as both agreed it was more fun and less stuffy than the Church one; there were games and good meals. The outings were very important to local children. Janet’s aunt, Miss Gregory, helped at the Chapel; she always wore a “pinny”, had her hair in a bun and changed after lunch. Janet and Carol remember her and the other Sunday school helpers as very old fashioned but kind. Later Carol’s Dad was able to hire a car from Hammond’s Garage for two days once a year and the family went to the seaside at Littlehampton.

Janet’s grandmother was Alice Gregory, sister to Walter West; he owned butchers shops in Wickham and Bishops Waltham. He bought the two Dairymoor properties and the butchers shop in the Square from William Houghton in 1892 and the family still own one of the Dairymoor houses today. You can see the family name on the front of Tull’s butchers in Wickham.

When the girls were older they went to “Ponderosa” – a wooden hall by the Boars Head pub in Boarhunt for the country and western dances. They collected a friend from the bottom of Dairymoor; her mother always told them to make sure she wouldn’t talk to any boys and her boyfriend would be waiting for her there! If they were lucky they might get a lift back on the bar of one of the boy’s bikes – but they always told their parents they walked home.

It wasn’t an easy life, people did not live as long and infections and other diseases weren’t as easily cured as today – Janet lost her sister, aged 13, to peritonitis – but looking back, both Carol and Janet felt they had, on the whole, a happy childhood and teenage years growing up in Wickham.