Home Articles Knowle and the Railway

Knowle and the Railway

Although there was already a railway line from London to Portsmouth, consent was given to build the Meon Valley Railway (MVR) by an Act of Parliament in 1897.

In 1898 the London and South West Railway (LSWR) purchased 7 acres of land from Knowle.  The following year, Wickham landowners were paid £7,500 for 23 acres of land.  In total over 298 acres of land was acquired.

Designed and constructed by LSWR, the new line was about 36km long and followed the London and Gosport turnpike road, joining the South West Railway Eastleigh and Portsmouth branch lines just north of the Knowle Hatches Viaduct, then passing down this line and into fareham.

Construction of the embankments, tunnels, bridges, etc. began at Butt’s Bridge, just west of Alton, then moved southwards. Although laid out as a single-track route to allow for future conversion to double-track, this never happened.

During 1904-06, a ‘relief’ line was built between Fareham and the junction at Knowle to bypass the existing Fareham tunnel which required remedial work.  This double-track bypass line ran through the north of Fareham and Funtley, rejoining the main line just south of Knowle Hospital.

With the tunnel work completed, the track was relaid with a single-track and the connection between the MVR and the Eastleigh to Fareham line removed.

In 1907 Knowle Halt opened to serve Knowle Hospital along with the village and brickworks of Funtley.
Powered by the hospital’s generators, Knowle Halt was one of the first stations to have electric lighting.  It had a single short platform with two sidings.  Allowing for both passengers and freight, the line was used to bring goods, including coal, to Knowle.  Extra trains stopped at the station on Knowle Hospital visiting days.

Initially served only by MVR trains, the 1921 reinstatement of the junction at Knowle allowed for trains on both routes to use Knowle Halt. 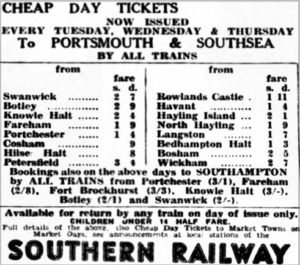 Knowle Halt was a small station, usually unstaffed and with few facilities.  Apparently passengers would have to hop off the train at Wickham to buy their tickets – this meant that on one occasion a mother was separated from her child when the train departed as she was still buying her tickets.  Fortunately the train was signalled to and backed-up to the station to collect the frantic mother!

During the Second World War, the line was used to move goods to the naval dockyard at Portsmouth.  It also played a vital role in the D-Day operations as it was used to ferry Winston Churchill and other Allied leaders from London to Droxford for crucial meetings at Southwick House, headquarters for the D-Day planning.

There are villagers who remember seeing Churchill coming out of the Wickham tea rooms – where The Tea Rooms (until recently Lilly’s) is today.

Increased competition from road travel after the Second World War reduced the demand for rail services and the MVR closed to passenger traffic in 1955.  The line continued to be used for freight until 1964 when it – along with Knowle Halt – finally closed.

After the closure, Hampshire County Council purchased the section between West Meon and Knowle: today the Meon Valley Trail is enjoyed by many walkers, ramblers and riders.

The main line from Eastleigh to Fareham still runs past Knowle.  With the planned development of Welbourne, perhaps Knowle will once again have a station!