I lived in Hundred Acres from 1944 till 1964 when I left to study in Edinburgh.  My parents were born in Portsmouth and spent most of the war years in the New Forest while my father taught the children from his school who were evacuated from Portsmouth.  Later, he was moved to the Spitfire factory near Southampton, working on quality control.  My mother looked after their two boys, one born just before the war and the other born while they were in the New Forest.

The history of Hundred Acres 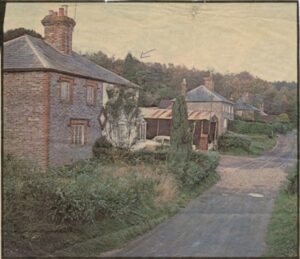 Alfie Stubbington was born at No. 12 Hundred Acres, the right-hand semi-detached house in the picture.

It is typical of the houses which had three bedrooms, no bathroom, and a rudimentary kitchen.  The water came from one of the wells nearby.

Alfie married and this became his family home.  He had ten children and his daughter Ruby describes how they slept four to a bed.  When needed, Alfie would keep his children off school in order to help with harvesting.  He would be fined ten shillings which he regarded as money well spent.

Rookesbury Estate built the 24 houses in the 1840s for the forestry workers who lived in very poor-quality housing in the forest.

When parts of the Estate were sold in 1928, the workers had the chance to buy their house at a very advantageous price. For those who could not afford to buy their house, others in the community helped them by buying it for them and then leasing it back for a modest rent.

Thinking about the origins of the name, the word ‘Hundred’ at one time referred to the amount of land required to sustain a peasant family.  I am not convinced that this is the origin of the name and there were only 64 acres in the area, so the name has no clear origin.

Hundred Acres is east of Wickham off the B2177 Road to Southwick. The layout of the houses has nine sets of semi-detached houses in one line, each with a long thin plot of land which the owners could use to grow their own food. A separate set of three semi-detached houses is nearby. The area was carved out of what was then forestry land owned by Rookesbury.

My Parents move to Hundred Acres

My parents bought a plot of land adjacent to the area allocated to Hundred Acres.  This was on the bridle path joining Rookesbury to Boarhunt. The land had to be cleared before they could use it. They moved there in August 1943, once my Dad was no longer needed at the Spitfire Factory and he returned to teach in Portsmouth. 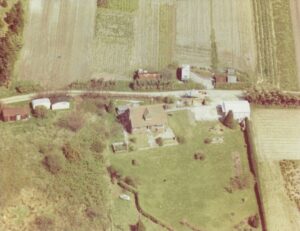 This aerial photo taken in the late 1960s shows our land as it was after my parents gave up growing flowers.  The caravan which is the third building from the left is the one my parents brought with them from the New Forest.  At that time they had two boys,  one was aged 6 months and the other 4 years old.  There was no running water and they had to dig a well tapping into the many aquifers in the area.  They also had to manage without electricity at first.  At some time around when I was born, my father decided we needed more space so he bought an army hut in Gosport and had it transported to the site.  It became our family home.  There was no bathroom and only a rudimentary kitchen.  Building the new house took several years because they had to convince the planning authorities that they were agricultural workers in order to get permission.

Eventually the well had a pump fitted providing water on demand but if the irrigation was run for too long there might be no water in the house.  The well also provided fridge facilities.  My mother would fill a bucket with things like milk and butter and lower it down the well by a rope to keep them cool.  At the top of the picture, you can see the layout of the plots which originated from the initial Hundred Acres plots.The garden is as it was after they gave up growing flowers.  Eventually it became a beautiful ornamental garden.

In 1949 at the age of five I attended Wickham Primary school.  I walked there and back 1.5 miles each way each day with my brother who was in the year above me.  There were no parents involved. We wandered across the main Southwick Road which today is a very busy road with fast moving traffic.    We walked in all weathers and when it rained, we arrived wet. The teacher would put our coats around the coke fire to dry.   With rationing still in full swing, we had free school lunches and a bottle of milk each day which we took mainly because we were hungry but the food was very basic. 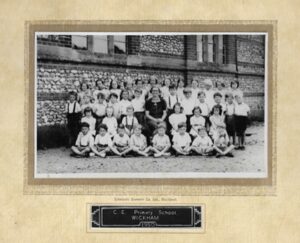 This is my very first class school photo taken in the summer of 1950 with Miss Green sitting amongst her many pupils.  In fact she lived on Hundred Acres Road and went to school on her bike. We never seemed to learn anything and we all failed our 11 plus exam and went to Fareham Secondary Modern School.

When my parents retired in the early 1990s, they bought a house on the site of the school, now Glebe Corner.  So when I went to visit them I was always reminded that their house was in the playground.

When they first moved to Hundred Acres my parents had very little income from the teaching job in Portsmouth. After the war the authorities had no money so my father often went unpaid.  To make money, they set up a business growing firstly vegetables then flowers on their piece of land.  My father was following on from his ancestors who worked on the Southwick Estate as agricultural labourers.

The most important day of the year for flower growers was the Thursday before Mothering Sunday when everything in the house that could hold water was filled with bunches of flowers.  This was the only night in the year when we avoided a bath because it was one of many things which could hold flowers.  On Friday morning we would get up early to pack the boxes and load them into the van so that Dad could drive it all to Portsmouth before going on to a full days teaching.  Most of our spare time, my brother and I played in the woods at the end of the lane only coming home to eat.

The Rookesbury Estate wall at the end of our lane on Hundred Acres Road had markings with stations for vehicles which was where the troops assembled for the D-Day landings in 1944.  The overhanging trees provided good cover for the troops.  Many of the troops stationed nearby were Canadian and on one occasion they filled my brothers pram with chocolate.  My brother loved this but my mother found a very sticky, chocolatey baby difficult to clean up. 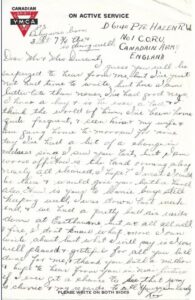 This is a letter written by a Canadian soldier who was stationed near my parents on Hundred Acres Road.  There is no date but it is very touching and refers to my parents clearing the land and to the two bonnie boys they had.  Of course, many of the soldiers who went to France did not come back so this letter is greatly intriguing.

It is written by Ron Hazen who was in the CORU which provided logistics and, clearly, he moved around a fair bit.  He was obviously familiar with my parents but the baby he refers to at the top of the letter was born in 1943 which suggests the Canadian army was in the area long before the D-Day landings took place.

Further research suggests that the soldier never went back to Canada and died in 2005 in Eastbourne.  His son still lives in Eastbourne.

Events on Wickham Common which is at the foot of Hundred Acres Road on the main Southwick Road.

I have a number of photos left by my Dad and believe them to have been given to him as the organizer of the event by the press photographer. 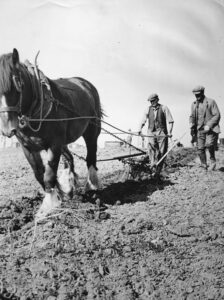 This is Bill Coker with his horse and plough.  He won the competition in his class being the only entrant.  He lived on Wickham Common. 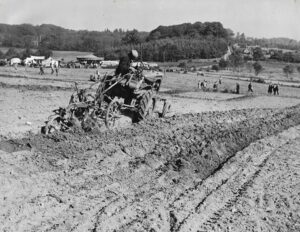 In this picture you can see a tractor ploughing on the common.   Note Hundred Acres Road at the top of the picture and the merry go round and fun fair.

I am not sure who this is but he did not come from Hundred Acres.  I say this because nobody in Hundred Acres had a “big” tractor. 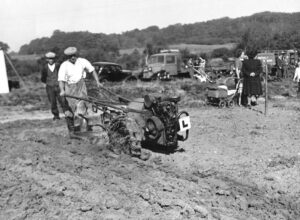 This is the sort of tractor they used in Hundred acres though they also did a lot of back breaking hoeing, weeding, etc.

Note the L plate which gives a flavour of the fun of the occasion.  Everyone was out for a good time. The man driving the tractor is Bill Long who lived in Hundred Acres. 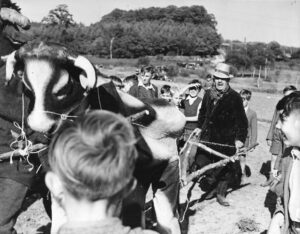 The pantomime horse also took part in the ploughing match, much to the delight of the local children.  It was unloaded from a very expensive horse trailer.

The horse and plough came from Botley NFU who were the judges of the competition.  Note the plough is wooden tied together with string. 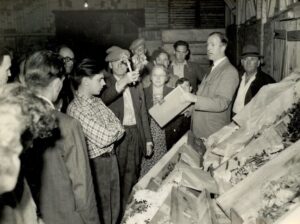 The Hampshire Growers market in its early days

The growers of Hundred Acres sold their produce at market.  In the early 1900s they took their produce to Wickham railway station where it was loaded onto a train for London.  In my time, on a regular basis a lorry would go down the track at the end of the plots picking up the boxes of cabbages or strawberries or whatever and take them to market to be sold.  At that time the market was Hampshire Growers in Shedfield.  It was formed straight after the war and they sold some produce as well as fertilizers and other things the growers needed.

But quickly the size grew, serving a large part of Hampshire and my father was instrumental in changing the way they operated.  In 1951 they began to operate as a cooperative auctioning the produce.

There is a lot of information on Hampshire Growers in the Museum of English Rural Life in Reading University. Unfortunately it is not digitised so only available to personal visitors.  The Hampshire Growers ceased trading in 1971 when all their records were passed to the museum.

I have very fond memories of life in Hundred Acres.  We had tremendous freedom and we were in a very loving family.  There were not many cars and there were great advantages in growing up in the country.  As an example, we used Big Hill for sledging when there was snow.  Cars could not get up it anyway and nobody worried about us crossing what are now very busy roads.  As a result, we could roam at will.