Ernie and Stan Woodford were brothers, brought up in houses on the Winchester Road, nearly opposite Lower House, and also at the bottom of Mill Lane. 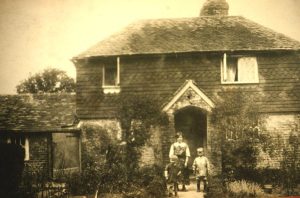 Their father worked at Buddens Farm.  They were both called up early in the War – Ernie at 19 and Stan at 18.

After training in the RAF, Ernie was posted to the Middle East, and was initially in Haifa, in what was then Palestine. In a balloon unit guarding the refinery there.  After being out of action for several months, Ernie was posted to Iraq, and served in Mosul and near Baghdad.  He says that between the two locations Palestine was more dangerous at the time than Baghdad.  Ernie finished the War as a Lance-corporal, and was still in the Middle East, after nearly 4 years, when VE day arrived.

Stan joined the Wickham Local Defence Volunteers before being called up, and spent 3 years in the Royal Pioneer Corps. Before D-Day he was attached to the RAMC, to man a casualty clearing station. Early on D-Day he found himself on a Normandy beach, with a task we must assume was so horrific that he never spoke to anyone about it afterwards.

After the War, Ernie worked at the International Stores in Wickham, and Stan for the local council, on road and manhole maintenance.  It was not until the 1960s, with the growth of modern cameras and slide films, that Stan’s career as an avid amateur photographer took off, leading to his vast collection of photographs of Wickham and Hampshire life in the last 40 years.