Born Dorothy Mary Warwick – although she preferred to be called Mary – in Wickham, in what is now Warwick Lane shopping arcade, she was the daughter of an ironmonger and his school-teacher wife. She attended Portsmouth High school for girls, left school at 16 and, after a year teaching English in Paris, trained in Oxford as a state-registered nurse, qualifying in 1946. After qualifying, she moved to the Wingfield Morris orthopaedic hospital, (now the Nuffield), Oxford, and then to the Middlesex Hospital, London, where her patients included soldiers returning from Dunkirk and victims of the Blitz. At Stoke Mandeville she also cared for burned airmen.

In 1945 she married John Donaldson, (a Lieutenant-Colonel serving with the Army), in Wickham, wearing a borrowed wedding dress and carrying a bouquet of bronze chrysanthemums. She met him when his mother had been a patient at the Middlesex. He became an eminent judge. Later knighted, Sir John Donaldson became President of the National Industrial Relations Court and then Master of the Rolls from 1982 to 1992. He achieved the peerage as Lord Donaldson of Lymington.

After her children had grown up, Mary Donaldson decided that she wanted to stand for election to her local authority, which was the Corporation of London. By 1966, Mary had three children and loved family life, but that did not stop her from standing for the Farringdon Without ward on the Common Council of the City of London which was her Local Authority. Her successful election made her the first woman in 800 years to sit as a Member of the Corporation. She became Chairman of the Women’s National Cancer Control Campaign from 1967 to 1969 and then Vice President of the British Cancer Council. When she herself developed cancer and underwent a double mastectomy, she intensified her efforts to encourage other women to seek check-ups and to try to help remove the fear and stigma attached to cancer at the time. 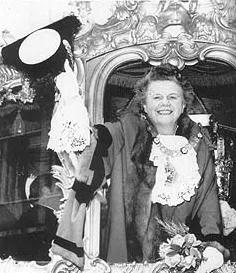 In 1983 she became the first female Lord Mayor in the 800-year history of the office.

During her term in office, she refused to call herself “chairwoman” or “Lady Mayoress” and at Guildhall fined people £1 in aid of charity, the NSPCC, if they incorrectly addressed her. She was appointed GBE in 1983. She chaired the Interim Licensing Authority for Human In Vitro Fertilisation and Embryology for six years from 1985, addressing the moral issues that arose from research in this area. From 1991 to 1996 she became a member of the Press Complaints Commission.

Her slogan was “It’s people that matter”, a principle that dominated her long period of public service. She was proud to be non-party political, and shunned the idea of she being a trail-blazing feminist. She simply wanted to make the world a better place. Public recognition mattered less to her than the work she did to help charities.

Mary enjoyed gardening, sailing and skiing. She and Lord Donaldson were a devoted couple.